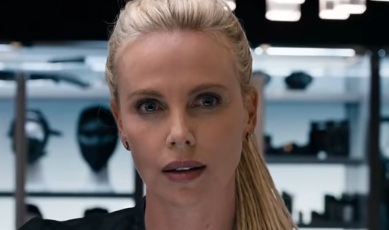 Charlize Theron – The Fate of the Furious

Universal Pictures has released a second trailer for the newest chapter in one of the most popular and enduring motion-picture serials of all time: Fast & Furious 8, slated to hit the US theaters on April 14.

The film follows the globetrotting team who seems to have found a semblance of a normal life dealing with challenges that test the members as never before, with a mysterious woman (Charlize Theron) seducing Dom into the world of crime.

“My team, listen up. This crew is about family. But the games has changed now”, says Dwayne Johnson’s character, Luke Hobbs at the beginning of the trailer. “Dominic Toretto just went rogue”, is another line referring to the former criminal and professional street racer who has retired and settled down with his wife, Letty, but is coerced by Cipher (Charlize Theron), a criminal mastermind, to work against his family. “You’re gonna turn your back on family?”, asks him Michelle Rodriguez’s character, Letty (Dom’s wife), while hurt on the ground.

His friends are advised to not give up on him (Dom) so easy, even if it (the situation) looks bad, and thus they take on the one chance they have to make their “family” whole again. The trailer features Theron as an evil genius described as “the very definition of the high-tech terrorism”, that has the power to control thousands of cars in the world, from London, to Abu Dhabi, and Cuba.

The song used in this trailer is “Push (Workout Remix)” by Total Workout Productions.