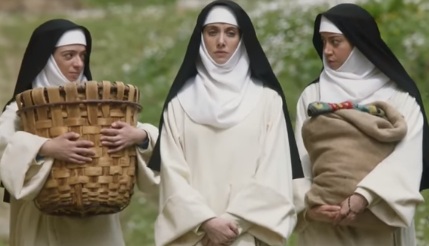 Alison Brie, Aubrey Plaza, and Kate Micucci are emotionally unstable nuns living at a convent in the middle ages in the upcoming dark comedy film The Little Hours. And they drive Dave Franco, who plays a young servant there, crazy.

Written and directed by Jeff Baena, the film revolves around the servant’s life at the convent full of nuns, that is not at all as he expected. The trailer reveals scenes illustrating the sins of the three nuns, named Fernanda,
Genevra, and Alessandra, such as “filty conversations”, “lustfulness”, “homosexuality”, and how hard life is for Massetto, the new servant, who must pretend he is deaf-mute to discourage temptation among the sisters. “These girls can be though. I’m not going to lie, they can be very though”, is warned Massetto (Dave Franco) when he decides to take refuge at the convent, as he is forced into hiding by his angry lord. “It’s not fair. You’re stuck here with all these bitches”, pities him a nun, and, for viewers to see that she’s right, another scene features one of the “crazy” nuns shouting loudly in his ear.

The song used in the trailer is “Bling Bling” by American rapper Junglepussy (Shayna McHayle by her real name), from her 2014 album “Satisfaction Guaranteed”.

The Little Hours, which had its world premiere at this year’s Sundance Film Festival, is set to be released this summer, on June 30.