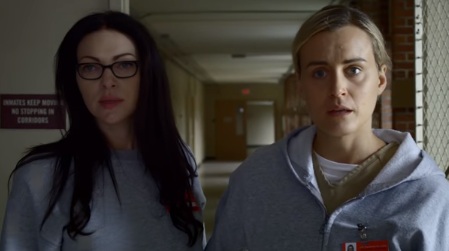 Orange Is The New Black – Season 5

Netflix has released a first look into the fifth season of the acclaimed comedy drama series Orange Is The New Black, which takes place in real time and over the course of three days.

The promo, revealing the first minute of the upcoming season, features the riot sparked at Litchfield (shown when season 4 ended) after Poussey’s death and Daya (played by Dascha Polanco) holding a gun on T. Humphrey, a security guard. While the convicts around her are shouting, summoning her to pull the trigger, she’s trying to think clearly and make a decision and, not far from there, Piper and Alex are trying to stay out of trouble. “That’s right. We see trouble, we turn around, we walk the other way. We are out of the business”, says Alex.

The clip ends with a gunshot, without showing – obviously – if Daya or someone else shot the guard, the wall or the ceiling, leaving fans in suspense until June 9, when season 5 is set to launch on the streaming service.