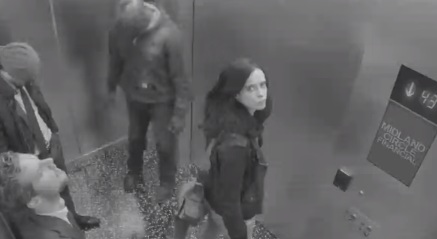 A teaser trailer for the Marvel’s The Defenders, a new Netflix series due out this summer, on August 18, has been released.

Created by Douglas Petrie and Marco Ramirez, The Defenders follows Daredevil, Jessica Jones, Luke Cage and Iron Fist as they join their forces and form The Defenders to protect New York City from a dangerous threat.

The promo features the four heroes in an elevator, going down from the 45th floor in the Midland Circle Financial,
and Krysten Ritter causing the surveillance camera to break. “You think the four of you can save the world?” – is the question asked by a mysterious male voice at the end of the trailer.

The song used in the trailer is a dramatic slowed down cover of Nirvana’s single “Come As You Are”,  from their 1991 album “Nevermind”.