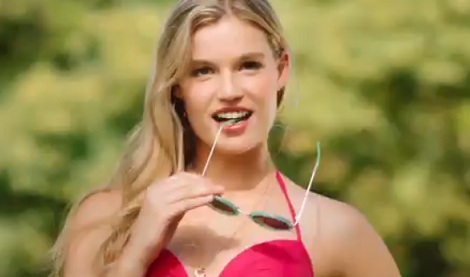 Love Island is back to take over your Summer. The British reality show returns to ITV2 with its third season and Caroline Flack as host, “very, very soon”.

The show, following hot singles taking up a luxurious villa in Balearics, coupling up and trying the convince the audience they deserve to remain there, for a chance to win the £50,000 prize, has been extended by a week, due to the success of last year, so the islanders have seven more days to secure their match, if they found one.

The promo released to promote the new season features a heatwave taking over a London park and several gorgeous
single women and hot men in swimsuits flirting with others in the park, even with people already in a relationship.

Among them, a bare chested man, cooling off with a hose pipe, makes a young mother drop the ice cream cone on her son’s head and a bikini-clad blonde girl distracts a goalkeeper from his “duty”.

The song used in the trailer is “Touch The Sky” by Cedric Gervais feat. Digital Farm Animals & Dallas Austin.