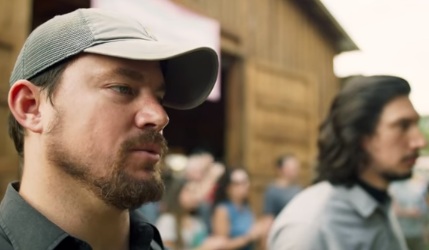 Channing Tatum and Adam Driver are two brothers trying to pull off a heist during a NASCAR race in the upcoming comedy film Logan Lucky, set to be released this summer.

Directed by Steven Soderbergh, the film follows the two siblings, Jimmy and Clyde Logan, as they hatch a plan to pull off an impressive heist during the Coca Cola 600 Cup NASCAR race held at Charlotte Motor Speedway, by taking the money through an elaborate hydraulic tube system under the speedway track. In the process, they get help from Joe Bang, an ex-con expert in blowing up vaults, played by Daniel Craig, who’s sporting for the role a shocking blond dye.

The song used in the trailer is the 2015 single “Down We Go” by rock band With Lion, which is also a production team, consisting of Christian Celaya, Woody Ranere and Josh Thomas. This track, from their album “Fast Luck”, has been featured in the “Pairings” commercial, part of the campaign “Rethink Whisky”, for Glenfiddich Bourbon Barrel Reserve 14 Year Old.