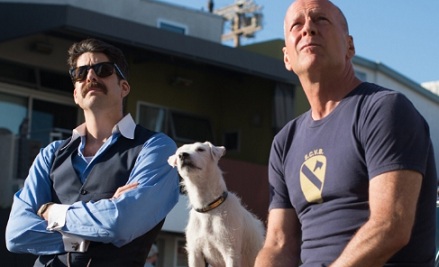 Bruce Willis is a Los Angeles private investigator able to do anything to get his dog back in the upcoming action comedy film Once Upon a Time in Venice.

Written and directed by Mark and Robb Cullen, the film follows Steve Ford (Willis) as he tries to get his dog (Buddy) back, who has been stolen by a gang of drug dealers. This is not very easy, though, as the gang lord, dubbed Spyder (Jason Momoa), forces him to do a job involving drugs.

The trailer features how Steve, determined to retrieve his furry friend, embarks on a quest that proves quite dangerous. He asks his assistant, John (Thomas Middleditch), to go with him and “wear extra underpants” during the operation, and involves also his best friend, Dave. “I gotta go steal back some drugs. Wanna come?”, asks Steve, who receives an unexpected response from Dave: “Sounds like fun!”. When he warns him that “it could be dangerous”, Dave doesn’t seem put off, answering “Maybe I’ll die”.

The two get some arms and start their mission to save Buddy, mission that implies doing all kind of things in 24 hours.

The film, starring also John Goodman, Famke Janssen, Adam Goldberg, Christopher McDonald, Stephanie Sigman, and
Wood Harris, is slated for a limited release and through video on demand this summer, on June 16.