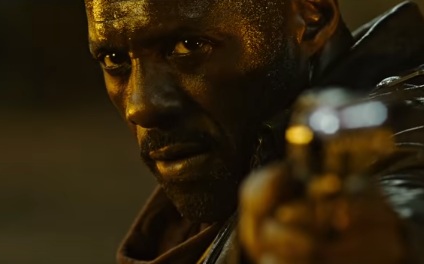 Idris Elba, Matthew McConaughey and young Tom Taylor co-star in the upcoming science fantasy Western film The
Dark Towe, based on the epic series of novels of the same name by Stephen King.

Taylor plays Jake Chamber, a 11-year-old boy who travels to another dimension, called Mid-World, where he encounters the last gunslinger, Roland Deschain (Elba), who’s on his way to reach the “Dark Tower” in the End-World and save all existence from extinction. This quest proves more difficult than foreseen as the evil sorcerer Walter Padick, also known as The Man in Black (McConaughey), and an army of monsters are on their trail.

The trailer features Taylor talking about his visions to a psychiatrist (he sees a tower, a man in black and a gunslinger) and how he gets to the Mid-World after discovering some clues. His encounter with the gunslinger there is also shown, along with the information that the tower he saw in his visions protects both their worlds and that, in case it falls, hell will be unleashed. The clip features also Padick, who’s described as being “worse than the Devil” by the gunslinger, saying that “you can’t stop what’s coming” and that “Death always wins”. The young boy tries to convince the Gunslinger to not let that tower fall, even if his world might be gone, in the world he comes from billions of people will die.

The film, directed by Nikolaj Arcel and starring also Katheryn Winnick, Fran Kranz, Jackie Earle Haley, Claudia Kim, Dennis Haysbert, Michael Barbieri and others, is set to be released this summer, on August 2 in the US and on August 18 in the UK.