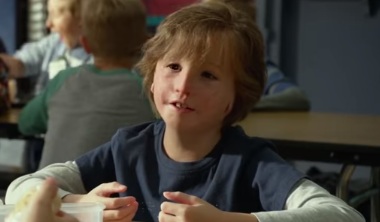 Julia Roberts and Owen Wilson return, this fall, on the silver screen as Isabel and Nate Pullman in the adaptation of the New York Times bestseller Wonder by R.J. Palacio.

Directed by Stephen Chbosky, the film revolves around Auggie Pullman (Jacob Tremblay), a young boy with a facial deformity, who attends for the first time a “real” school, and must deal with all the inherent daily challenges. His parents are confronted with new challenges, as well, and must find a way to help him be self-confident and assertive.

The trailer features Tremblay’s character, who had 27 surgeries that helped him to breathe, see and hear without an an hearing aid, trying to go to school with an astronaut helmet on and Wilson taking it, saying he doesn’t need it. As he’s forced to hear all kind of bad remarks related to his face, he also receives support from his parents, who tell him that they love his face and that he is not ugly. “You can’t blend in when you were born to stand out” – is one of the lines revealed in the trailer, which features the song “Life’s Adventures” by American musician, singer-songwriter, and record producer Tim Myers, from his 2015 album “The Year”.

Wonder is set to be released in the US theaters on November 17.