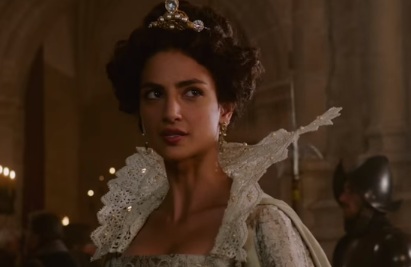 A 30-second promo has been released for the upcoming ABC period drama series Still Star-Crossed, set to premiere on May 29.

The series from Shonda Rhimes, who is the “rainmaker” at ABC, created by Heather Mitchell and based on Melinda Taub’s book with same name, picks up where the famous story of Romeo and Juliet ends and chronicles the palace intrigue, the betrayal, and the doomed romances of the Montagues and Capulets following the death of the two young lovers. The cast ensemble includes Wade Briggs, Anthony Head, Zuleikha Robinson, Ebonee Noel, Lashana Lynch, Grant Bowler, Sterling Sulieman Medalion Rahimi, Susan Wooldridge, Dan Hildebrand, and Torrance Coombs.

The short trailer, featuring images from the official trailer released by the TV channel in 2016, when the series was announced in pomp (remaining subsequently in a state of limbo) and highlighting that “Romeo & Juliet’s ending was just the beginning”, urges viewers to prepare for the “epic next chapter”.

The song playing in the trailer is the 2016 single “(I Just) Died in Your Arms [Epic Trailer Version]” by Hidden Citizens.