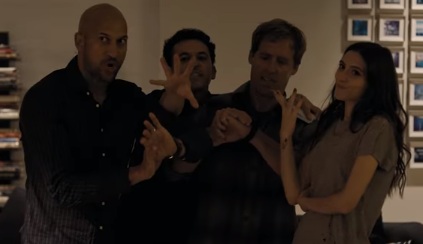 Netflix has dropped a teaser trailer for its upcoming original series Friends From College, about acting your age, set to be released this summer, on July 14.

The new eight-part comedy series, created by Nick Stoller and Francesca Delbanco, revolves around a group of friends who went to Harvard together and are now dealing with the new challenges in both their professional and personal lives, from success or lack of success, to complicated relationships and romantic entanglements, and nostalgia for the past.

The clip released by the streaming service features a group of four friends doing drugs in the middle of the week and doing all kind of things that seem funny to them, like dancing steps, writing down on a glass wall with a permanent marker, throwing a slice of pizza against a wall and keeping time spent until it falls down.

The song playing in the background is the single “Wild Thing” by American rapper Tone Lōc, from his 1989 album “Lōc-ed After Dark”.