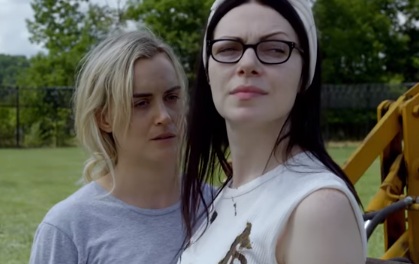 After the first look clip dropped a month ago, the full trailer for the upcoming season of Orange is the New Black has been released.

Netflix’s original hit drama series returns with its fifth season on June 9, with new challenges for Alex, Piper and their inmates of Litchfield Penitentiary, who must deal with prejudice, oppression, violence, and many more.

The clip, set to the rhythms of “The Way I Do” by British musician based in LA Bishop Briggs, reveals there will be a rebellion and a riot (“To whom it may concern, we, the inmates of Litchfield, are human beings and we’re protesting the abusive conditions under which we are being held”), with lots of social lessons and empowering messages included, such as “If we want to turn this place right, we have to speak as one united group”, “We want justice”, “You see a problem, you deal with it.”, “This is my home and I’m going to fight for it.”, “We get to make demands”, “No idea is a bad idea”, “The only way out is for us to come together”, “There’s more strength in a single unified message.” The scenes revealed from the upcoming season, which is set over a period of only three days, features the inmates of Litchfield displaying a wide range of emotions, from anger to joy and even happiness.

“Injustice. Justice. Rejection. Rebellion, Imprisoned. Empowered. Stand. Stand Up.” – are the onscreen lines in the highly-anticipated trailer, released today by the streaming service.