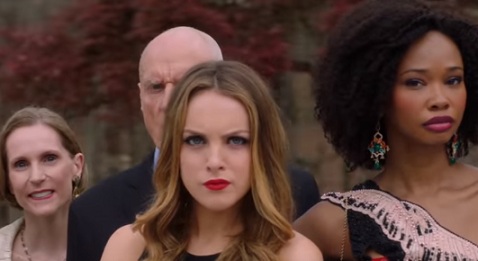 “Welcome to the 1% of the 1%” – is the message conveyed in the first look trailer released by The CW for its upcoming soap opera series Dynasty, a reboot based on the series of the same name, which ran from 1981 to 1989 on ABC.

The new show, created by Josh Schwartz, Stephanie Savage, and Sallie Patrick, revolves around the Carringtons, Blake Carrington – the owner of a global energy empire, Fallon Carrington, his cunning daughter, poised to become the new COO of his company, her gay brother, Steven, and their stepmother-to-be, Cristal, whom Fallon hates.

The trailer, carrying the message “They have money, they have power, they have everything, and they want more”, features Fallon reuniting with Steven and her father in Atlanta and the encounter with Cristal, about whom Fallon believes is a gold-digger. When Fallon’s attempts to stop the wedding prove to be in vain, a war begins between the two women.

The songs playing in the background are “Hell On Wheels” by Nick Nolan and “Roll With Me” by Raphael Lake.