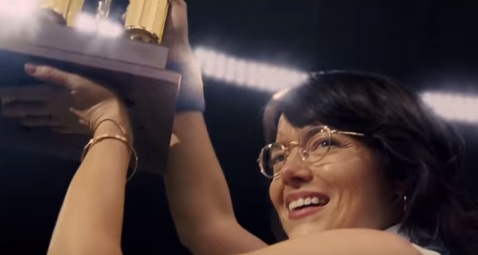 Emma Stone and Steve Carell play Billie Jean King and Bobby Riggs in the upcoming sports comedy-drama Battle of the Sexes, loosely based on the 1973 tennis match between the two tennis stars.

Written by Simon Beaufoy and directed by Jonathan Dayton and Valerie Faris, the film follows World number one and feminist icon Billie Jean King and ex-champ and serial hustler Bobby Riggs as they are trapped in the media glare, on opposite sides of a binary argument, but also off-court, where each of them fights more personal and complex battles. While Riggs fights with his gambling demons, at the expense of his family and wife Priscilla, in his attempt to relive the glories of the past, King is struggling to come to terms with her sexuality.

The trailer features Emma Stone’s character fight for women’s equality, stating that women should be paid and respected equally, and reveals how the showdown between her and Riggs has been organized. Scenes revealing her intimate relationship with Marilyn Barnett, her hairdresser, who become her lover, are also revealed.

The songs playing in the trailer are the 2008 remastered version of “I’ve Got The Music In Me” by The Kiki Dee Band in the first half and Aerosmith’s 1973 power ballad “Dream On”, from their debut album, “Aerosmith”.