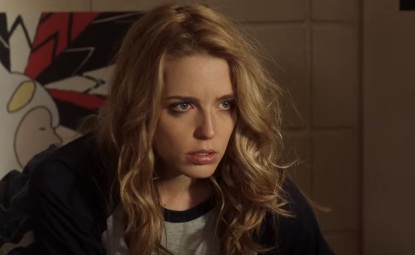 The trailer for Happy Death Day, a slasher Groundhog Day, has been released.

The film, directed by Christopher B. Landon, who also wrote the script together with Scott Lobdell, follows Tree, a college student who relives her birthday over and over again to figure out who’s trying to kill her and why.

The clip features Jessica Rothe as the protagonist waking up in her dorm room on her birthday, doing the walk of shame home, and on the point of being murdered, lots of times and in many different ways, by someone wearing a mask. When a friend suggests that she could take advantage of this “Groundhog Day” for her to find out the killer’s identity, she starts doing this, but the endeavor is not easy at all.

The song playing in the trailer, used as a ringtone by Tree for when her father calls, is 50 Cent’s 2003 single “In Da Club”, from his debut studio album “Get Rich or Die Tryin'”, which was nominated, at the 46th Grammy Awards, for Best Male Rap Solo Performance and Best Rap Song.