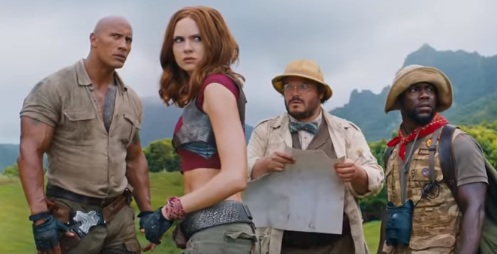 The trailer for the sequel to the 1995 film Jumanji, titled Jumanji: Welcome to the Jungle, has been released.

Written by Chris McKenna, Erik Sommers, Scott Rosenberg and Jeff Pinkner and directed by Jake Kasdan, the fantasy adventure film, also known as Jumnaji 2, follows four high school students who discover, while being in detention and cleaning out the basement, a vintage video game version of Jumanji, and are drawn into its jungle setting, as the adult avatars they chose: Dr. Smolder Bravestone, Franklin “Moose” Finbar, Ruby Roundhouse, and Professor Shelly Oberon.

The trailer features Dwayne Johnson as Bravestone, Kevin Hart as Moose, Karen Gillan as Ruby and Jack Black as Professor Shelly Oberon in their attempt to survive Jumanji, on the most dangerous adventure of their lives.

The action-packed trailer reveals lots of funny scenes, as well, such as the moment Bethany, a gorgeous blonde girl, realizes she’s Professor Shelly Oberon, whom she described as “an overweight middle-aged man”, the moment they decide to run for their lives and Fridge’s avatar, Moose (Kevin Hart), asks “Why am I running so slow?”, the moment Spencer, a geek turned into Bravestone (Dwayne Johnson) stops during a fight to warn his opponent (“I have to warn you: I think I’m a very strong puncher”).

The song used in the trailer is “Welcome to the Jungle” by legendary rock band Guns N’ Roses, from their debut album, Appetite for Destruction, released in 1987.

Jumanji: Welcome to the Jungle, starring also Nick Jonas, Alex Wolf, Madison Iseman, Morgan Turner, Ser’Darius Blain, Missi Pyle, Marc Evan Jackson, and others, is set to be released in the US theaters this winter, on December 22.