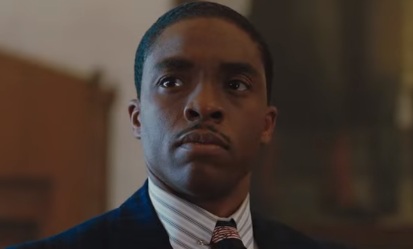 The official trailer for the upcoming biographical thriller film Marshall, about the first African-American Supreme Court Justice Thurgood Marshall, has been released.

Written by Michael and Jacob Koskoff and directed by Reginald Hudlin, the motion picture stars Chadwick Boseman as Marshall and follows him on his early days as a young attorney for the NAACP, before he became the first African-American Supreme Court Justice and before he won Brown vs. Board of Education, the case that desegregated schools, fighting alongside attorney Sam Friedman (played by Josh Gad), the case of black chaffeur Joseph Spell (played Sterling K. Brown), accused by his white employer, Eleanor Strubing (played by Kate Hudson), of sexual assault and attempted murder.

The trailer features Boseman’s character telling to Brown’s character “I only represent innocent people, people who
are accused because of their race. That’s my mission.” The latter answers that he never touched “that woman”, referring to Eleanor Strubing, who states, in court, that he attacked her. Boseman, who believes that neither of them have been telling the truth, is told that his client should accept the deal. “The only way to get through the biggest door is to break it down” – he says in another scene.

The song playing in the the trailer is “Rebels” by Ohana Bam.

Marshall is set to be released this fall, on October 13.