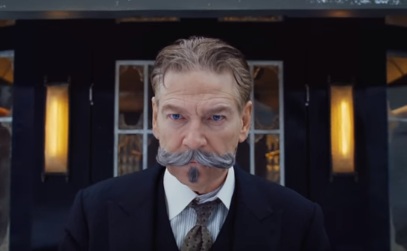 Kenneth Branagh is Hercule Poirot in the upcoming mystery film Murder on the Orient Express, based on one of Agatha Christie’s most famous novels, and directed by Branagh.

The official trailer for the film has been released, featuring only for a few seconds the iconic character, who describes himself as “Probably the best detective in the world”. In the clip, the camera acts like the detective’s eyes, who moves through the main corridor of the train and looks at each passenger, introduced to viewers with his titled beneath (i.e. The butler, the professor, the assistant, the widow). The cast ensemble includes also Penélope Cruz, Michelle Pfeiffer, Judi Dench, Johnny Depp, Willem Dafoe, Josh Gad, Leslie Odom Jr., Derek Jacobi, and Daisy Ridley.

The song playing at the end of the trailer is the newest single “Believer” by American rock band Imagine Dragons, released in February, from their album “Evolve”.

This film, which is the third motion picture adaptation of Christie’s novel, will be distributed by 20th Century Fox this fall, on November 10.