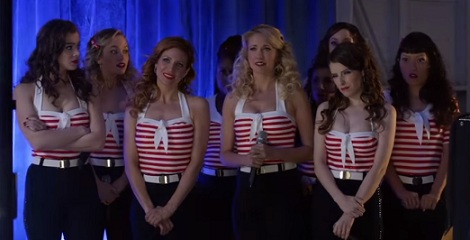 The first trailer for Pitch Perfect 3 has been released. The upcoming sequel to the musical comedy film, written by
Kay Cannon and directed by Trish Sie, reunites the Barden Bellas post-graduation to go on an USO tour.

The film, which is the last one of the Pitch Perfect series, stars Anna Kendrick, Rebel Wilson, Brittany Snow, Anna Camp, Hailee Steinfeld, and Elizabeth Banks, who reprise their roles, along with new cast members John Lithgow and Ruby Rose.

The trailer features Kendrick’s character, Beca, quitting her job and going with her singing squad on an overseas USO tour, in Europe, where they compete against a seemingly very professional group, with original songs. The film seems to be also action-packed, as the girls are shown in some pulseracing scenes, such as jumping out of a flaming boat, fighting, and sky diving.

The songs used in the trailer are “Legend” by American indie pop duo The Score and Pink’s 2001 single “Get the Party Started”, from her second studio album, “Missundaztood”.

Pitch Perfect 3 is set to be released in theaters this winter, on December 22, 2017.