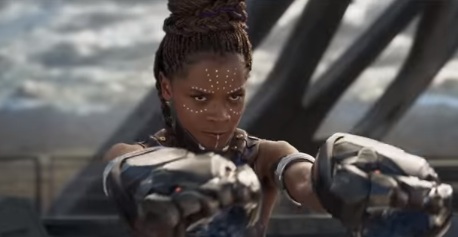 Directed by Ryan Coogler, the movie is scheduled to be released on February 16, 2018.

Trailer Song: Run The Jewels Lyrics – Legend Has It

Hear what I say, we are the business today
Fuck shit is finished today
RT&J, we the new PB&J
We dropped a classic today
We did a tablet of acid today
Did joints with the masses and ashes away
We dash away
Donner and Dixon, the pistol is blastin’ away

Doctors of death
Curing our patients of breath
We oughta pay you the trust
Cookin’ up work
Cookin’ up curses and slurs
Smokin’ my brain into mush
I became famous for blamin’ you f..ks
Maimin’ my way through the brush
There is no training or taming of me and my bruh
Look like a man, but I’m animal raw

We are the murderous pair
That went to jail and we murdered the murderers there
Then went to Hell and discovered the devil
Delivered some hurt and despair
Used to have powder to push
Now I smoke pounds of the kush
Holy, I’m burnin’ a bush
Now I give a f..k about none of this sh.t
Jewel runner over and out of this b..ch