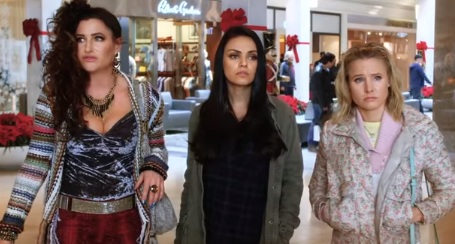 Mila Kunis, Kristen Bell and Kathryn Hahn reunite for the sequel to the 2016 Bad Moms, titled “A Bad Moms Christmas”.

The three best friends (Amy, Kiki and Carla), who seem to be under-appreciated and overburdened in the trailer released for the film, must deal with more stress during the Christmas holidays when their respective mothers come to visit.

The trailer, starting with Andy Williams’s song “It’s the Most Wonderful Time of the Year”, features the trio attempting to remember, while getting drunk at the food court in a mall, the times when holidays “were fun”. Their plan to have a chill holiday and just “enjoy Christmas this year” is shattered by their moms, who seem to arrive without prior notice and give them a hard time, reminding them instead that they are moms and “Moms don’t enjoy, they give joy” because “That’s how being a mom works”, according to Amy’s mother, played by Christine Baranski. Susan Sarandon and Cheryl Hines play the other two moms, of Kiki (Kristen Bell) and Carla (Kathryn Hahn).

The trailer also features a camel inside a house and the three moms giving Santa a raunchy lap dance.

Written and directed by Jon Lucas and Scott Moore, A Bad Moms Christmas, starring also Jay Hernandez, Peter Gallagher, Justin Hartley, and David Walton, is set to be released in theaters this fall, on November 3.