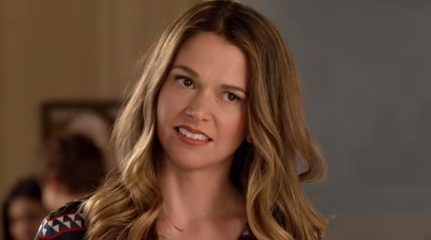 Younger returns to TV Land this month, on June 28, with its fourth season.

The comedy drama series, created by Darren Star, revolves around Liza Miller (Sutton Foster), a recently divorced 40-year-old mother, who tries to start at the bottom and lies about her age, pretending that she’s much younger, to get a job as an assistant at a publishing firm. There, she befriends a colleague in her twenties, Kelsey, played by Hillary Duff.

The trailer released for the upcoming season, which picks up immediately following Liza’s confession to Kelsey that she’s been lying about her age, shows Liza explaining the reason why she kept lying about her age: “I know it was selfish, but the longer it went on, the harder it became to tell you the truth”. Kelsey is featured telling Josh (played by Nico Tortorella), the tattoo artist that mistaken Liza for being younger than she is and had a short relationship with her that she knows “everything, everything” and, in another scene, at the office, telling Liza that “shit’s about to go down”.

Season 4 will include several guest stars, such as Charles Michael Davis (from The Originals), Kristin Chenoweth (from American Gods), Michael Urie (from Ugly Betty), and Jennifer Westfeldt (from 24). The series, which received generally positive reviews from critics, has already been renewed for a fifth season.

The song used in the trailer is Fantasy by MS MR.