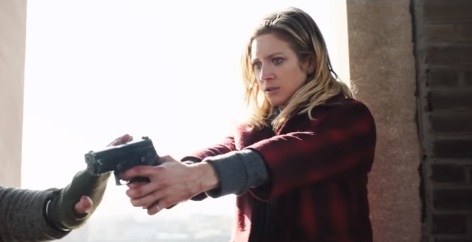 Brittany Show and Dave Bautista depend on each other to survive in the upcoming action thriller Bushwick.

Written by Nick Damici and Graham Reznick and directed by Cary Murnion and Jonathan Milott, the film is set in Brooklyn’s Bushwick neighborhood and follows a young woman named Lucy (Brittany Show) who finds, one day, after stepping off the subway, total destruction at every corner as a result of an invasion by a Texas military force.

Her path crosses with Stupe, a burly war veteran (Bautista), who saves her from the hands of criminals and helps her reach her destination.

The film, which premiered at this year’s Sundance Film Festival, is set to be released this summer, on August 25.