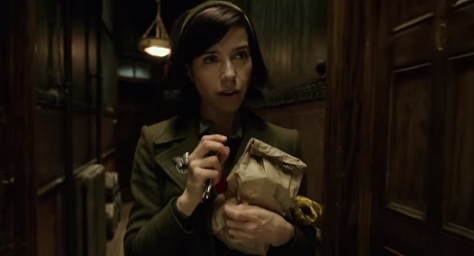 The trailer for Guillermo del Toro’s upcoming thriller The Shape of Water has been released.

The film, set in the Cold War era America, around 1963, follows Elisa (Sally Hawkins), a mute woman working as a cleaner in a hidden high-security government laboratory who discovers a secret classified experiment consisting of an amphibious man held captive in a tank.

The trailer features Hawkins’ character finding the creature in the lab, of which it’s said is “intelligent”, “capable of language”, “of understanding emotions”. In support of this statement, made by a scientist, she communicates to a man (played by Richard Jenkins) through sign language that, when he (the aquatic man) looks at her, he doesn’t know how she is “incomplete” – “he sees me as I am”, says Elisa, who forms a special connection beyond words with him and tries to save from the lab.

The song used in the trailer is “La Javanaise” by American jazz and blues singer-songwriter Madeleine Peyroux, off her 2006 album, “Half the Perfect World”.

The Shape of Water, described as a “Merman Fairy Tale”, is set to be released in the US theaters on December 8, 2017.