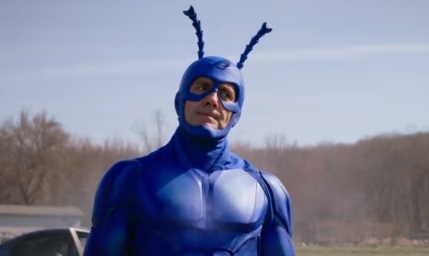 The trailer for the upcoming Amazon original series The Tick, set to launch on Amazon Prime Video on August 25, has been released.

Created by Ben Edlund, the new TV show is set in a world where superheroes have been real for decades and follows Arthur, an accountant with mental health issues and zero powers who realizes that his city is owned by a global super villain long-thought dead. On his quest to uncover the conspiracy, he forms a crime-fighting duo with a mysterious blue superhero, The Tick, who insisted that he (Arthur) became the brains in the team.

The trailer begins with a voiceover saying hi to the world and describing this as “an epic tale”, saying that it has adventure, good against evil and blood loss. The Tick (played by Peter Serafinowicz) and Arthur (played by Griffin Newman) are shown in several scenes fighting against villains, with the first one teaching his fellow some things. “How can I put this? Murder, it’s just not cool.” – says Tick to Arthur, after having hit an enemy in the head with a tire. He also seems to have a sense of humor, as he doesn’t hesitate to throw a joke in the most unexpected situations. “You are alive as a daisy.” – he says to Arthur after the latter’s fall on a car.

The song used in the trailer is “Everywhere I Go (Kings And Queens)” by Danish rock band New Politics, from their 2015 album “Vikings”.