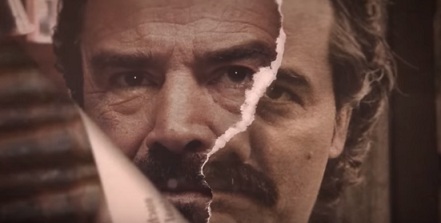 Narcos returns to Netflix, this fall, on September 1st, with its third season. The streaming service has released a teaser trailer for its acclaimed series about the criminal exploits of Colombian drug lord Pablo Escobar.

The series, created and produced by Chris Brancato, Carlo Bernard, and Doug Miro, tells the story of drug kingpin Pablo Escobar, who became a billionaire through the production and distribution of cocaine, while also focusing on Escobar’s interactions with drug lords, DEA agents, and various opposition entities. The second season sees Escobar, who celebrated his 44th birthday hidden in a safehouse, being hit twice in a shootout and executed by a Columbian policeman and his wife, Tata, asking for help from the Cali cartel to leave the country, and DEA agent Peña returning to the US, where is asked to provide intelligence against the Cali cartel.

“Cocaine cartels are about succession. While the whole world was focused on Escobar, Cali became the biggest cocaine cartel in history. To pretend that these guys weren’t just as evil as the guy that came before them, that’s a mistake.” – is the message conveyed in the teaser, launched with the tagline “Rise of a new empire”.

The song playing in the teaser trailer is “Tuyo”, which is also the series opening theme, a bolero written and composed for the show by Brazilian singer-songwriter Rodrigo Amarante.