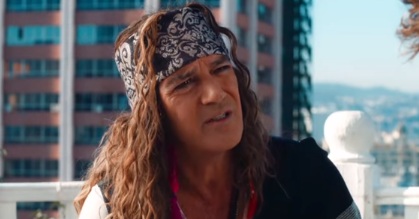 Written by Mark Haskell Smith and directed by Simon West, the film follows an aging and pampered rock star named Turk Henry (Banderas) as he takes to the backstreets of Santiago (Chile) to find his supermodel wife (Olga Kurylenko), who gets kidnapped by renegades.

The action-packed trailer, released with the message “Rock out with your glock out”, features the couple Banderas – Kurylenko as husband and wife vacationing in Chile. One day, when he had an important meeting, she goes on a trip into the wild to see the local life ends up by being kidnapped. Her husband recruits some wacky people and sets out on a mission to find and set her free.

One of the scenes reveals a short conversation between Kurylenko’s character and one of her kidnappers, who tells
her she has to make a choice between starving and freedom. “When I was modelling, I had to skip meals all the time.” – she answers.

Gun Shy is scheduled to be released by Saban Film in select theaters this fall, on September 8.