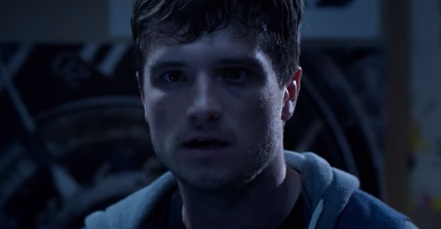 Hulu has released the official trailer for its upcoming action comedy sci-fi series Future Man, about a youngster who embarks on a mission that implies time travel to save humanity.

The show, from Executive Producers Seth Rogen and Evan Goldberg (who also produced Knocked Up and Sausage Party), follows Josh Futturman (played by Josh Hutcherson – who also played Peeta in Hunger Games), a janitor by day at an STD research laboratory and world-ranked gamer by night, procclaimed “the savior” by mysterious visitors from the future after he manages to beat his favorite video game, Cybergeddon, who travels through time to prevent the extinction of humanity. The cast also includes Eliza Coupe, Derek Wilson, Glenne Headly, Ed Begley Jr. and others.

The trailer, soundtracked by Kenny Loggings 1986 single “Danger Zone” (part of the soundtrack to the 1986 film Top Gun), features Josh achieving high honors in one Cybergeddon and being visited by two warriors from the future (played by Eliza Coupe and Derek Wilson), who tell him he is “the savior” and recruit him to set out on a mission to kill the man who’s trying to find a cure for human herpes as this is what will bring down the human kind. A series of trips through time follow, as well as a series of adventures.

The first 13-episode season is scheduled to premiere on the streaming service this fall, on November 14th.