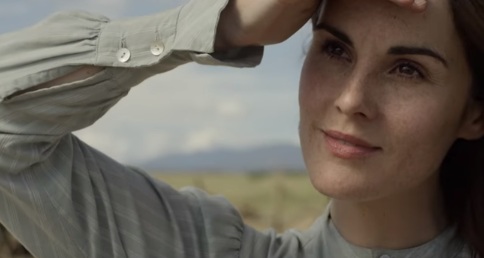 Netflix has released a teaser trailer for its upcoming original limited series Godless, from Steven Soderbergh and Scott Frank.

The TV show, written and directed by Scott Frank, follows Frank Griffin (Jeff Daniels), an outlaw terrorizing the 1880s American West, who arrives in a town called La Belle (in New Mexico), which is made up entirely of women, in his quest to hunt down his former partner, turned enemy, Roy Goode (Jack O’Connell).

The teaser, welcoming viewers to “No Man’s Land”, doesn’t reveal too much of the plot, giving instead glimpses of the main cast and scenes aiming to illustrate the idea of a “No Man’s Land”, which include barren landscapes, a train derailment, bearded men taking out pistols, a baby boy encountering a rattlesnake.

The seven-part series is set to premiere on the streaming service later this fall, on Wednesday, November 22.

The song playing in the background is “Bang Bang (My Baby Shot Me Down)” by Nico Vega.