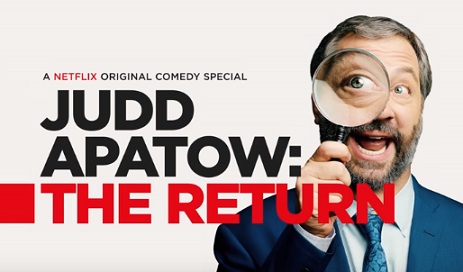 Netflix has launched the official trailer for its upcoming original comedy special Judd Apatow: The Return, set to
premiere December 12.

Apatow, who stopped doing stand-up in 1992, is returning to the stage after 25 years to prove he’s still got it. The trailer features him on stage revealing a conversation he had with his daughter before taking on this challenge and the support she offered. “I said to my daughter “I don’t know if I can do this, I’m getting really nervous. And she goes: “Then don’t do it, dad. Don’t do it!” Another joke is related to his celebrity status. “It’s amazing I can draw a crowd, isn’t it? If I’m walking down the street and somebody says ‘Are you Judd Apatow?’, if I say ‘No’, they go ‘Alright’. – he says.

Apatow, the guy who brought you “The 40-Year-Old Virgin”, “Trainwreck”, “Bridesmaids”, and more, said he stopped doing stand-up because he created “The Ben Stiller Show”.