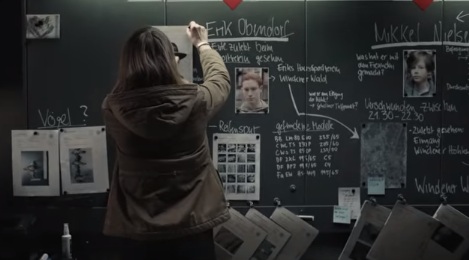 Netflix has launched the trailer for its upcoming original German drama series “Dark”, created by Baran bo Odar and Jantje Friese and scheduled to be released on December 1, 2017.

“Weeks ago, in the small town of Winden, a 15-year-old boy dissappeared under mysterious circumstances. Residents are now alarmed after a second child has gone missing” is the subject revealed at the beginning of the trailer. Some strange scenes and a female voiceover saying “This city is sick. And we’re all part of it”, have the effect to deepen the mystery.

In a place where the future also influences the past, the begigning is the end, and the end is the begigning, the question is not who has kidnapped the boy, but when.

The song playing in the background is “Goodbye” by the German electronic musician, Sascha Ring (known as Apparat), featuring Soap&Skin, from the album The Devil’s Walk (2011).