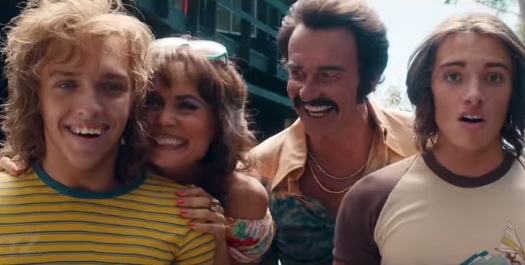 The trailer for the upcoming comedy drama film Swinging Safari, starring Guy Pearce and Kylie Minogue, has been
released.

Written and directed by Stephan Elliott, the film – which is described as “a love letter to a world of careless parenting, constant sunburn and dangerous unsupervised activities”, revolves around some families living in the beachside neighborhood of a small Australian town during the 1970s. When a A 200-ton blue whale washes up on a local beach, while kids think that’s the biggest thing that happened in their lives, adults celebrate in their own special way. The cast ensemble also includes Radha Mitchell, Julian McMahon, Asher Keddie, Jeremy Sims and Jack Thompson.

The song used in the trailer is the 1970 hit single “Chirpy Chirpy Cheep Cheep” by Scottish band Middle of the Road.

The film is set to be released in Australia on January 18, 2018. An official US release date has not been set yet.