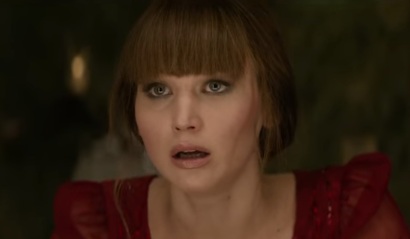 The trailer for the upcoming spy thriller Red Sparrow, starring Jennifer Lawrence, has been released.

Based on Jason Matthews’ novel of the same name, the film revolves around Russian intelligence officer Dominika Egorova, who falls for CIA agent Nathaniel Nash, the American mole in Russia, whom she should expose.

The trailer features Jennifer Lawrence as a prima ballerina who turns into a spy after undergoing a sadistic training process at Sparrow School, where young people are taught how to use their bodies and minds as weapons. She proves to be the best recruit of the respective secret intelligence service, becoming the most dangerous Sparrow, but soon she finds herself struggling to deal with the power she now commands, as her life, as well as the lives of those she cares about are at risk.

“From this day forward you will become Sparrows, weapons in a global struggle for power.” – Rampling’s character is seen telling the new recruits on a winter day, informing them that they will be trained in psychological manipulation. “When we are finished with you, the person you were no longer exists.” – she also says. Her lines do not end here, though. She is also heard saying that “every human being is a puzzle of meat.” and advises recruits that they “must become the missing piece” in order to make their targets tells them anything.

In one of the scenes, Dominika Egorova is told “You have a gift, you know how to survive. This is what you are meant to do.” while on screen images of her fighting with a man (apparently a male Sparrow) in a shower are seen. Viewers also get a glimpse into her encounter with CIA agent Nash, who – as their relationship grows stronger – asks her to work with him and make “these men” pay.