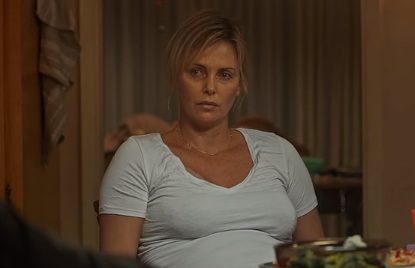 Universal Pictures has just released the official international trailer for the upcoming comedy drama film Tully, described as “a story about motherhood in 2018”, starring Charlize Theron.

Written by Academy Award-winning screenwriter Diablo Cody and directed by Academy Award-nominated director Jason Reitman, the film revolves around Marlo (Theron), a mother of three including a newborn, who forms a unique bond with the young night nanny named Tully (played by Canadian actress Mackenzie Davis). The cast also includes Mark Duplass as Marlo’s brother, the one who recommends Tully as a baby sitter, and Ron Livingston.

The trailer features Charlize Theron’s character waking up in the middle of the night to get the baby bottle ready for her infant, pumping milk, and trying to put the baby back to sleep. She is also seen reading bedtime stories to her children in a tent, and fallen asleep on a couch at a kids’ party. Mackenzie Davis is shown only at the end of the trailer, ringing to Theron’s door and introducing herself.

The film is set to be released in theaters this spring, on April 20.