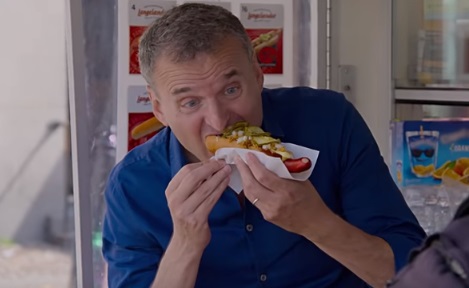 Netflix has released a teaser for the second season of its original documentary series Somebody Feed Phil.

The show, created by Phil Rosenthal, follows Phil Rosenthal (James Beard award-winning producer and creator of “Everybody Loves Raymond”) as he travels the globe to take in the local cuisine and culture of a variety of cities.

“What if my wife sees this and likes it and then she’ll want me to wear this around the house?” Phil is heard asking at the beginning of the teaser, while riding a horse in the company of several locals and wearing a sombrero. One thing is sure: he’s going to look for more good things to eat in New York City, Copenhagen, Buenos Aires, Dublin, Cape Town, and Venice. Pizza, hot dogs, steak, brownies – Phile tries them all and, judging by his reaction, he gets the chance to enjoy exquisite local delicacies in the cities he visits. In addition, he also takes a tango lesson from a professional dancer.

The first season of Rosenthal’s culinary travelogue saw him on a trip to Bangkok, Saigon, Tel Aviv, Lisbon, New Orleans and Mexico City. Season 2, consisting of six episodes, will be released by the streaming service next month, on July 6. This is only one of the food-focused Netflix originals, others being David Chang’s Ugly Delicious and Chef’s Table, Nailed It!.