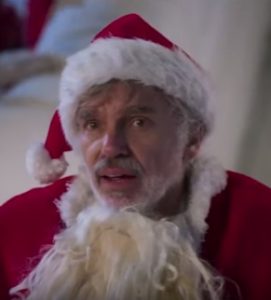 The upcoming Christmas black comedy crime film Bad Santa 2, the sequel to the 2003 Bad Santa, follows Willie as he teams up with his angry little sidekick, Marcus, to knock off a Chicago charity on Christmas Eve.
Directed by Mark Waters, the film stars Billy Bob Thornton, Tony Cox, Brett Kelly, Kathy Bates, and Christina Hendricks and is scheduled to be released on November 23.
The track used in the trailer is “Back in the Saddle” by Aerosmith.