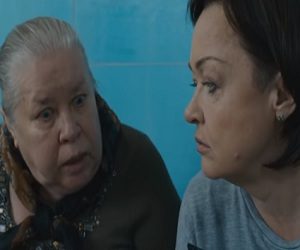 Zoology is a Russian dramedy about middle-aged zoo worker Natasha, unmarried and still living with her mother in a small coastal town, who has to deal with the gossip spread by the women around her. As she feels stuck, one day, life has a surprise for her: a tail.
Despite this “accessory”, she starts a love affair with the much younger and handsome Peter, the x-ray technician who saw the tail, but didn’t react to the strange sight.
Directed by Ivan I. Tverdovskiy, the film, starring Natalya Pavlenkova and Dmitriy Groshev in the leading roles, premiered at the 51st Karlovy Vary Film Festival. According to the critics, it would be a terrible mistake to refer to Zoology as the “middle aged woman with a tail movie”, because it is, in fact, a movie about much more.