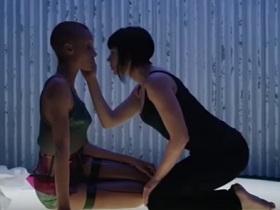 Scarlet Johansson returns to the silver screen as a cyborg policewoman who attempts to thwart a nefarious computer hacker in the
upcoming sci-fi action film Ghost in the Shell, directed by Rupert Sanders.
Based on Masamune Shirow’s Japanese manga of the same name, the movie stars also Pilou Asbaek, Michael Pitt, Takeshi Kitano, Chin Han,
Lasarus Ratuere and Juliette Binoche and it is scheduled to be released in theaters on March 21, 2017.