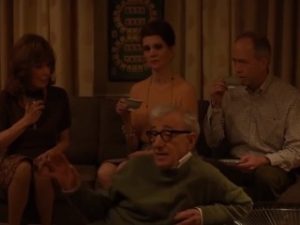 Crisis in Six Scenes is a comedy TV series created by Woody Allen for Amazon Studios, about a middle class suburban family whose household is turned upside down by a visitor.
Set in 1960’s, during turbulent times in the United States, the series stars Woody Allen, Miley Cyrus, Elaine May, Gad Elmaleh and is scheduled to premiere on September 30.
Crisis in Six Scenes will be available exclusively on Amazon Video in the United States, the United Kingdom and Germany.
The track used in the trailer is “Volunteers” by Jefferson Airplane.