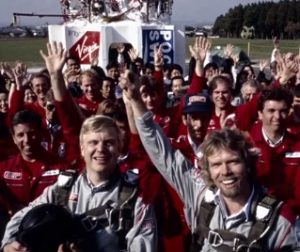 Don’t Look Down is a story of courage, determination, despair and triumph. It is the story of Sir Richard Branson and his attempts to break world records flying in a hot air balloon.
The documentary is directed by Daniel Gordon, who used interviews with Branson, his team, archive and dramatic recons in order to detail every step of the journey, from balloon construction to the flight itself.