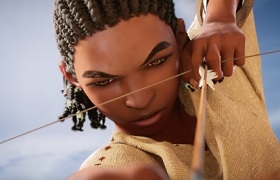 Every now and then comes a story that shows the strength of humanity and inspires us to reach for the stars. It is the story of Bilal from the upcoming animated movie Bilal: A New Breed of Hero, which tells an ancient tale of a boy abducted from his mother, who found the courage to raise his voice and make a change in a world of greed and injustice.
The trailer invites you to travel back in time and witness the birth of courage as one boy will challenge everything, earning thus his remembrance in time and history.
Directed by Khurram H. Alavi and Ayman Jamal, the film features the voices of Adewale Akinnuoye-Agbaje, Ian McShane, China Anne McClain and will be released in the US theaters this month.