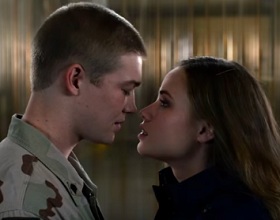 Billy Lynn’s Long Halftime Walk is an upcoming war drama following 19-year-old Army specialist Billy Lynn, who, after fighting in Iraq and returning home as a hero, recounts the tragic memories of the war at the Dallas Cowboys’ Thanksgiving game. The young man, who barely survived a though battle, must deal also with the loss of his sergeant in a firefight.
Based on Ben Fountain’s novel of the same name, the movie is directed by Ang Lee and stars Joe Alwyn, Kristen Stewart, Vin Diesel, Garrett Hedlund, Steve Martin and Chris Tucker.
The soundtrack music is composed by Jeff Danna and Mychael Danna. The track used in the trailer is “Heroes” by Scala & Kolacny Brothers.
Billy Lynn’s Long Halftime Walk premiered at the New York Film Festival, in October, and is slated to be released in the US theaters on November 11.

I, I wish I could swim
Like dolphins, like dolphins can swim
Though nothing, will keep us together