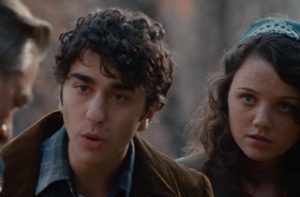 2016 Movies: Coming Through the Rye

From the director James Sadwith comes, this fall, a new indie drama about the discovery of love and of the meaning of one’s life, titled Coming Through the Rye.
The main character is a 16-year-old boy who embarks on a journey to find J.D. Salinger, whose novel The Catcher in the Rye has influenced him. Bullied by his classmates, the teenager runs away from his boarding school in search for the famous author. His life changes when a girl picks him up and decides to go with him.
The cast includes Alex Wolff, Stefania Owen, Chris Cooper, Adrian Pasdar and others. Coming Through the Rye is slated for release in US theaters on October 14.
The song playing in the trailer is “Codes” by the American musician Heath McNease.