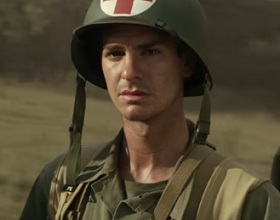 Andrew Garfield plays US Army medic Desmond T. Doss in the upcoming biographical war film Hacksaw Ridge, directed by Mel Gibson.
Doss participated at the Battle of Okinawa in World War II, but he refused to bear arms. Nevertheless, he managed to save the lives of dozens of his comrades while under constant enemy fire.
Hacksaw Ridge, based on a true story and described as an anti-war film, also stars Vince Vaughn, Sam Worthington, Luke Bracey, Hugo Weaving, Ryan Corr, Teresa Palmer, Richard Pyros and Rachel Griffiths, and is scheduled to be released in the US theaters on November 4, one day after the release in Australia.