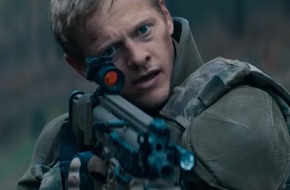 Kill Command is a sci-fi action thriller film set in the near future and centered around an elite squad of highly trained US Marine Corps soldiers who must fight for survival after the attack of advanced military robots.
Written and directed by Steven Gomez, the movie stars Thure Lindhardt, Vanessa Kirby, Bentley Kalu, Tom McKay, Mike Noble, David Ajala, Osi Okerafor and others.
It was released in the UK on May 13.