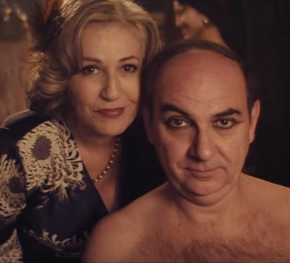 Neruda is an upcoming drama film telling the story of how the Chilean poet Pablo Neruda, hunted down by an obsessive police inspector in the late 1940s, after the WWII, became a fugitive in his home country.

Written by Guillermo Calderón and directed by Pablo Larraín, the movie stars Luis Gnecco in the leading role, Gael García Bernal as the police inspector, Gael García Bernal, Alfredo Castro, Mercedes Morán, Antonia Zegers, Pablo Derqui, Marcelo Alonso and others.
“They say that Neruda is the most important communist in the world. This man would pull a piece of paper out of his pocket and ten thousand workers would go silent to hear him recite poetry” – says a man in the trailer released by 20th Century Fox.
Out in Chile theaters since August 11, the film will hit the US theaters on December 16.