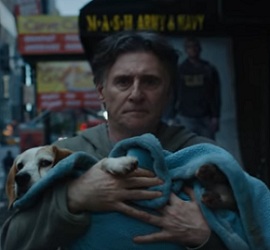 Gabriel Byrne plays Lester Rosenthal, an aging actor who has lost his way, in the upcoming comedy drama film “No Pay, Nudity”, scheduled to be released this fall. As he tries to continue his career, he returns to his hometown to play the fool in “King Lear” and the audition proves to be a life-changing event.
The movie, marking Lee Wilkof’s directorial debut, also stars Nathan Lane, Frances Conroy, Donna Murphy, Jon Michael Hill, J. Smith Cameron, Mark Blum Zoe Perry, and J.R. Horne.
Its release in the US theaters is set for November.
The track used in the trailer is “Never Come Back Again” by Austin Plaine.

I wanna see the world, I wanna sail the ocean
I wanna know what it feels like to never come back again

I wanna wake my soul, climb the highest mountain
I wanna write my name in the clouds and never come again

I wanna find my love, lose myself in passion
I wanna love her in my heart and never come back again