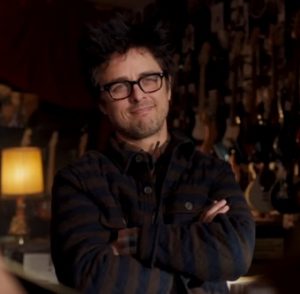 The film, which marks Armstrong’s first leading role, follows Perry, a former punk rocker who lives an ordinary life until his 40th birthday, when his family forgets to greet him and he decides to throw a huge party in a New York hotel, helped by his brother.
The cast members include also Judy Greer, Dallas Roberts, Selma Blair, Chris Messina, Brian Baumgartner, Fred Armisen, and Kevin Corrigan.
With original score, composed by Billie Joe Armstrong and Dickon Hinchliffe, Ordinary World is scheduled to hit theaters on 14th of October.
The song that Armstrong performs in front of a woman, playing the guitar, in the trailer, is titled “Ordinary World” and is part of  the soundtrack.