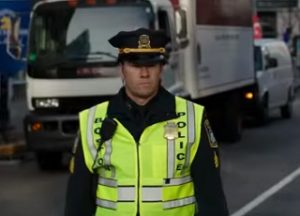 Patriots Day is an upcoming drama directed by Peter Berg, about the 2013 Boston Marathon bombing and the subsequent city-wide manhunt led by Boston Police Commissioner Edward F. Davis to find the terrorists behind it.
The film stars Mark Wahlberg, J. K. Simmons, John Goodman, Kevin Bacon and Michelle Monaghan, and is scheduled for a limited release on December 21, with a wide release on January 13, 2017.