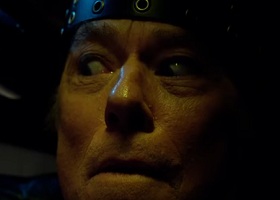 Phantasm: Ravager is the fifth and final installment in the Phantasm series.
Directed by David Hartman (this is the only film in the series not directed by Don Coscarelli), the horror movie, also known as Phantasm V, stars A. Michael Baldwin, Reggie Bannister, Bill Thornbury, Gloria Lynne Henry, Daniel Roebuck, and Angus Scrimm in his final appearance as The Tall Man. Actor Angus Scrimm, who played The Tall Man, died at age 89 on January 9, 2016.
Phantasm: Ravager, which had its premiere at Austin’s Fantastic Fest on September 25, 2016, was released in the US theaters and via digital HD on October 7.